Of Dreams and Time Travel 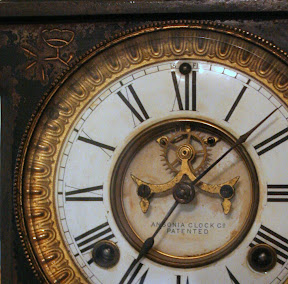 Lately I’ve been the benefactor of a lot of really bizarre dreams. As I hear the history, Poe and Lovecraft and King all benefited from wild, unbidden nighttime ponderances, so when I woke up this morning I let this one roll around in my mind for the entire day. Sadly, I’m no Poe so I won’t come close to doing it justice but perhaps this, like everything else in life, is an iterative art best practiced day after day after day. At any rate, I present my fractured vision of last night’s dream below plus or minus the embellishments resultant from a day of thinking about it.

We find ourselves sometime in the distant future when time travel is cheap and ubiquitous. Cosmic paradoxes aside, anyone can flit about the fourth dimension with abandon. As an aside, I pondered for some time how such ability would impact our culture. At the least, I suspect that it would make us much more protective of our personal information and quite a bit more polite. It would be highly unlikely that we’d dare to piss off anyone who could go back to our cribs and kill us in our sleep as infants. Knowledge truly is power in this world.

Any rate, back to the narrative. A woman enters a bar followed by two men. The first a young braggadocious romeo and the second an older more mature man. The trio find a table and a discussion ensues that gradually becomes heated. The youth, thinking to do away with his older rival, activates a device on his wrist and vanishes. Moments later, the older gentleman disappears and the youth returns. He proceeds to boast that he’s done away with the old guy by altering the past. After a few moments, our young upstart begins to squirm in his seat. He notices with some horror that his extremities are slowly ‘eroding’. His fingers, hands, arms are slowly vanishing from the tips. To his horror, the progression continues until he is just a disembodied head lolling about on the table, yet somehow still animated and conscious, with just a spine protruding from the bottom of his skull. In the depths of his agony, his older competitor reappears, smirks at the terrified youth, says simply, “You missed” and struts casually out of the bar.

The image from the dream that really sticks with me is the one of the guy’s head, terrified, eyes rolling, with just a soft pink spine sticking out, the only appendage he has left to waggle in his disconcerted horror. If I had it in me to describe the progression of the destruction of the young punk that would be worth saving. I have a number of images running through my head as he looks down at the stump of his arm, five tiny fingernails still present but slowly wilting away. It was a good visual to be sure as the tiny nanomolecular machines the old man planted on him gobble up his very existence.

In any case, I think I need to start writing down my dreams.