A few months ago when Facebook went public there were a few people around me who perked up their ears, remembering the dot.com boom of the 90s, and said that they needed to buy in to the IPO. As a person who drove down the street and heard ads on the radio for eBay and Google before their IPOs and thought, “Really wish I had some money to buy some stock in that place” I could sympathize. Everybody wants in on the ground floor of some great stock but when Facebook IPO’d something in my soul screamed, “NO!” As it turns out, my soul was right. Facebook now trades below 50% of its initial offering price. Clearly this is because I’m some sort of stock market genius, right? Um. Fuck No. My portfolios are under water same as everyone else’s but I know a real stinker when I see it.

Until today I didn’t really have a good sense of why my instincts shouted at me this way. Everybody’s on Facebook nowadays. I’ve got more friends on there than I have in real life. I see more random crap content from Facebook than from any other source. Where else am I going to get my daily quota of funny cat pictures and meaningless personal status messages? Not to mention, I see more advertising from Facebook than from the television. What can possibly fail in that business model?

As it turns out, at least two things can fail. Firstly, I don’t remember ever having clicked on any of Facebook’s advertising. Ever. Ever ever. Right now on my Facebook feed I see an ad for American Express and I’m abundantly not tempted to click on it. I couldn’t care less. This is the rule for every paid ad I ever recall seeing. It’s a total targeting failure. What I do see is a story from Mental Floss. I’m seriously tempted to subscribe to the magazine and I’m tempted every time I see a posting. Only problem for Facebook? I ‘Liked’ this page because someone else did and Facebook didn’t make a single dime. I’ve run some advertising of my own so I know how their pricing structure works. The fact that Jen liked Mental Floss and shared something and thus caused me to like it didn’t net Facebook a solitary penny. If I actually do make a purchase then it’ll be through Amazon and Facebook will have missed out utterly. Facebook is a great conduit for commonality but they’ve failed to actually determine how to make money with that information.

Secondly, Facebook has tried to be the grand unifier of all information about everything. You can tell it about your reading preferences, your new tattoo or your bedroom conquests and it’ll happily accept all you have to give. The problem is that Facebook is not ultimately the repository of most of the information that will be of real financial use. Sure, I give Facebook my random photos or status updates but today when I was entering the last 10 years of my reading history, information that could be legitimately used to actually sell me something, I was on Goodreads, not Facebook. Facebook introduced me to this third party because someone else I know used them but again, Facebook’s not making a dime.

At its heart, the business model seems flawed and doomed. Facebook is giving up a ton of information and connecting a lot of people but they’re not really reaping as much as they could in return. There are 1,000 specialty websites that service specific needs so well that Facebook seems unable to compete. Want to write movie reviews? Try IMDB. Need to talk about books? Take your pick of websites. Want to just blog randomly? WordPress is your best option. Facebook is the nexus of scads of personal information connecting consumers to service providers but I can’t help but feel that the vast majority of it is going to waste. I like Facebook, but I feel its ultimate ruination closing in on it. A thousand swords of Damocles hang over its head.

The Detritus of History

All this talk of art has brought me back to an old thought that I think is in need of revival.  As you may or may not be aware, the other third of this blog is dedicated to old advertising.  It’s an entirely separate blog but made to look like just another part of this one by some menus (so if you want updates on that you’ll have to subscribe to it individually).  On it I try to sift through this rather large pile of advertisements I’ve acquired over the years and provide some random commentary. Basically, they’re just more and different writing prompts.

At some point during all this “collecting”, I sat looking at a large pile of ads and thought that there must be SOMETHING I could do with all these things.  For God’s sake some of these are 100 year old so I’m certainly not going to pitch them. So I scan them and save them off on Picasa and then somewhat sadly put the originals into a box.  Even this fate seemed sad to me though.  It occurred to me that the right and proper place for these was to display them but I certainly don’t have sufficient wall space for all the things.  Thus, for a few months I went on a tear of putting together collages and giving them to people at work.  Some were well received and some… well, not so much.  I tried my utmost to personalize them to the person receiving them so that there would be some connection but it is worth noting that sometimes that’s rather hard to judge.

As I sit here on Saturday morning I think it may be time to revive this little art form.  Anyone wishing to purchase such a thing need merely drop me a line and I’ll cogitate upon the prospect. 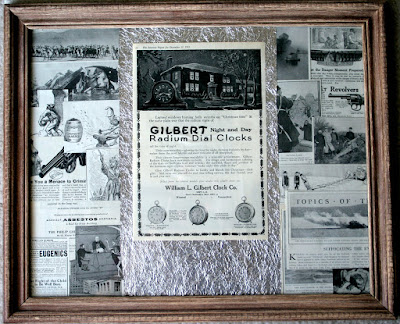 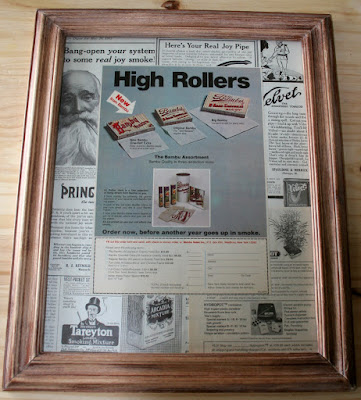 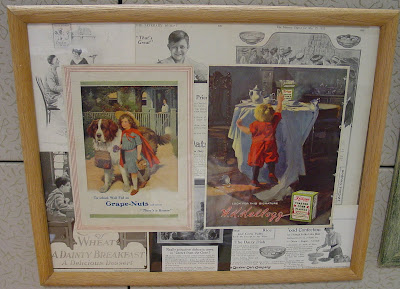 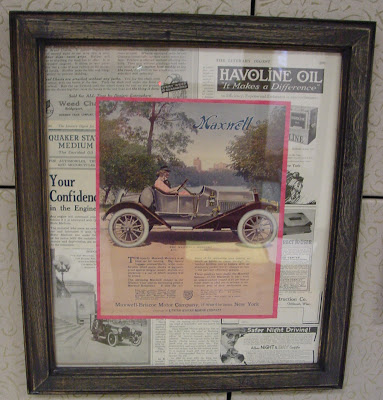 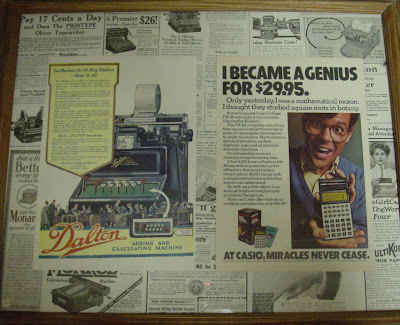 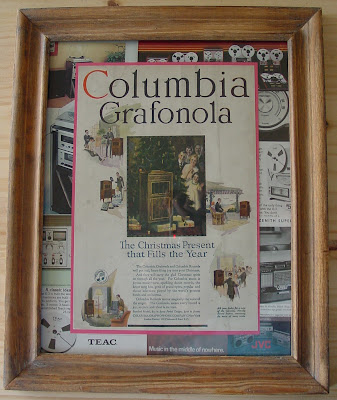 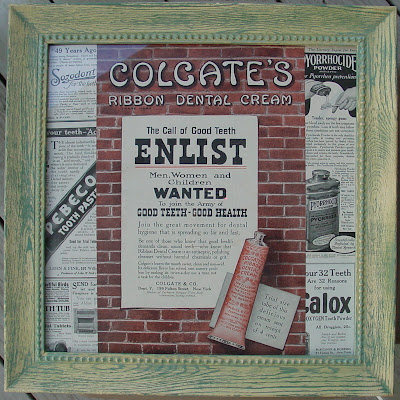 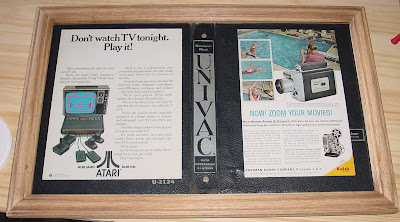 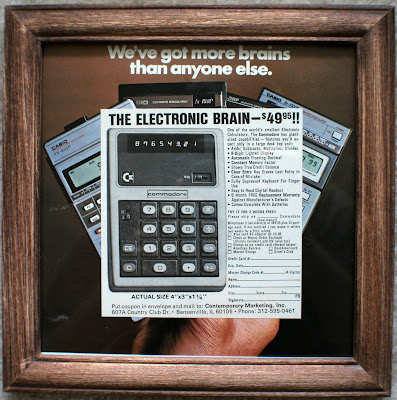 Hi!  My name is Izzy and I’m six years old.  I’m writing today to tell you about a great opportunity I recently heard about at one of my Girl Scout meetings.  Oh, and my dad is making me say that he’s “co-authoring” this with me but apparently that means that I get to write the whole blasted thing while he sits on the sofa and watches football.  It’s so unfair being six.

The other day when I went to Girl Scouts there were a bunch of girls talking really excitedly.  Ever curious, I joined in and it seems that this year we’re going to be selling cookies!  I must admit that when I started doing this whole scouting thing I had no idea we were in for something like this.  Can you believe that for the price of just $3.50 a box you’ll get cookies delivered to your home or workplace?  That’s the best thing since the printing press!  (My dad made me put that in.  I’m more of a Kindle girl myself.)  I think it goes without saying that I’m extremely excited about this wonderful opportunity to bring cookies into your life this year.

Now you may, at this point, be saying to yourself, “But I already have plenty of cookies at home already.  Why would I buy more?”  And, as an average American you probably do have plenty of cookies.  Cookies are an endemic and perennially popular part of our culture.  Looking at one type of cookie alone, there have been over 491 billion pounds of Oreos sold in the past century.  Americans love cookies.  However, need I remind you that these aren’t just ANY cookies.  These are Girl Scout cookies.  Accept no substitutes.  Statistics show that Girl Scout cookies are 33 times more satisfying than ordinary cookies.

So in closing, I’d like to ask that when you sit down to calculate your cookie budget for the month that you give careful consideration to the possibility that you might throw a couple simoleons my way.  Order forms are available at my Dad’s work and my Mom’s as well.  Don’t be afraid to put yourself down for 10 or 20 or even 100 boxes.  We have a vast distribution network that will assure rapid and accurate delivery of your order no matter how large.  We guarantee 100% satisfaction and that you’ll enjoy our cookies at least 33 times more** than those ordinary cookies you might buy in the store.

** Guarantee of enjoyment void in Rhode Island.  Consumers should keep in mind that enjoyment is a non-measurable entity and that statistics cited in this advertisement are totally made up.