Book Reviews: The Ballad of a Small Player by Lawrence Osborne (***) 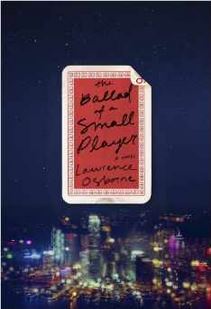 As usual I received this book for free in exchange for a review. This time from LibraryThing. Also as usual I provide my scrupulously honest feedback below.

The story runs basically along the lines of the standard ne’er-do-well gambler who runs afoul of not only the law but also the laws of probability until one day… he doesn’t. That’s really all you need to know and probably exactly what you expected.

On the positive side of things, the setting for this novel is fascinating and that fact alone is what kept me reading. The multitude of cultural differences in the East and Macau specifically make for an entertaining backdrop if you’re a xenophile who just likes to see how other people live and think. It seems evident that the author has spent no small amount of time in this region and has gotten to know the natives as well as they know themselves. I believe this is what the more professional reviews tend to refer to as ‘atmospheric’. It was that and it’s a good thing because there wasn’t much else to keep me interested.

To the negative, there just isn’t … anything. To speak bluntly, things happen to this gent but at no point am I at all sure why I should care. He’s neither sympathetic nor sufficiently odious to inspire any real opinion one way or another. The description refers to this book as “suspenseful” and somehow a “ghost story” but don’t believe a word of it. Through the book there’s a passing reference to spirits in two sentences out of the entire text. Even then it’s just passed off as the superstition of the natives and quickly dropped. I just don’t see how this book lives up to its description.

In summary, normally I blast through a book this size in a night but in this case it stretched on for a week because I kept finding reasons not to go back to it. This one drags on abominably and resides on the fetid fringes of not even worth finishing. If you’re really into Eastern culture or love baccarat specifically, this will have some appeal. The rest of you should just move on to something else. An interesting cultural peepshow but not what the majority of the world is going to consider worthwhile.